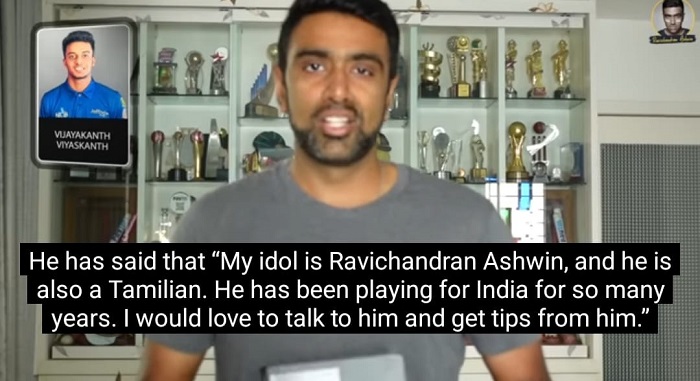 Speaking during his YouTube talk show, Ashwin stated that cricket commentator Russel Arnold had approached and informed him that Viyaskanth had requested to contact him.

Commenting on Viyaskanth, India’s Ashwin stated that Viyaskanth is a leg spinner for the Jaffna Kings team in the Lanka Premier League, adding “He is as tall as me and is someone who bowls in a flatter trajectory.”

Ashwin further said that even though Viyaskanth has been active in the cricketing field over the last 2 years, he performed really well in the LPL 2022 and was also awarded emerging player of the tournament.

“When inquired about his future, Viyaskanth said that I, Ravichandran Ashwin, was his idol who has been playing for India for a long time and he would like to receive tips from me. Viyaskanth I have been following your journey,” Ashwin said.

Stating that he was inspired to bowl the carrom ball by Sri Lanka cricketer Ajantha Mendis, India’s Ashwin said that he saw Mendis playing so even before he represented Sri Lanka and was playing part of the YSCA Trophy in Chennai.

“Tamil Nadu used to play in Sri Lanka as part of the MG Gopalan Trophy. There are talks to revive the series. If so, then I hope to meet you there. All the best for your career,” Ashwin added as a personal message to Sri Lanka’s Vijayakanth Viyaskanth.