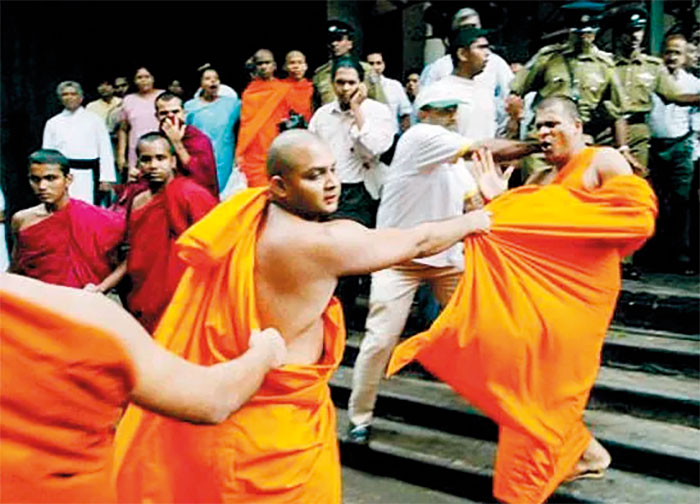 A file photo of Buddhist monks clashing at a public event

Recent happenings at the so-called “Pali and Buddhist University” are deeply disturbing. Bestial conduct that passes as “ragging” and the unearthing of huge heaps of liquor empties are incendiary.

This should normally ignite public reaction, and some delving through a very searching and substantial inquiry. That politics and religion do not mix stands eloquently proven.

Happenings in Iran, Afghanistan and Myanmar are examples of consequent disasters.

In our society too, there have been such disastrous mistakes. The disgusting behaviour of the “student monks”, in reality, unshaven, long-haired goons, is a terrible slur on a religion that is rightfully proud of its long existence as a non-violent, non-coercive, supremely tolerant and merciful and non-violent teaching. It leaves no room for personal indiscipline or departures from moral rectitude. These are the standards laid down for mere lay-followers, and needless to say, more extensive and binding on the Bhikkhu Order (the Maha Sangha).

The Order of Monks are beings who have voluntarily undertaken to eschew shallow joys. Thus, to lead a life of total renunciation and commitment to a simple, meditative, self-improving way of life. The Vinaya Pitaka, governing conduct of the Ordained, and a portion of the Thripitaka, lists no less than some 200 odd Rules of conduct for Bhikkus and Bhikkhunis. It is recorded that the Buddha, before his passing away, addressed his disciples, translated as “Behold, O Bhikkhus, these are my last words to you. All component things in this World are impermanent. They are subject to change. Go forth with diligence and each seek your own salvation”

In all the Dhamma records, discipline for laymen and Bhikkhus is a constant theme. Since entering the Order is explicitly voluntary and a free choice, there is no concept of enforced expulsion. Rather, a binding obligation of simplicity, dignified, restrained and exemplary conduct. This is why devotees display reverence for the robe, and honour the Maha Sangha by providing sustenance and shelter.

One may be reminded that the very term “Sangha” means “The Homeless Ones”. Entering the Community of monks, and seeing the respect extended by trusting devotees, there can be no ambiguity about the compulsion of self- discipline. In its absence, all is lost.

There is a dilemma here. Since a spirit of forgiveness and gentle mercy is what is implicit,what could one do? On the other hand, this group has violated the explicit requirement, and in fact sullied their records and become positively Dus-seela. They have thereby forfeited their expectation of the respect and sustenance of devotees.

There are many monks of unquestionable nobility in our country, who manifest the qualities of dignity and exemplary behaviour, and zealously guard Sri Lanka’s position as an acknowledged leader for Theravada Buddhism. A bunch of misguided youth, simply cannot be allowed to destroy the dignity of the Order, and tarnish the image of Sri Lanka as a leader in a philosophy that the World is seeking in ever increasing numbers. This too cannot be compromised.

There has been an increase in the number of people, particularly in Western countries, who are keen to learn the Dhamma and enter the order. Without offence to the excellent and exemplary monks that Sri Lanka is blessed with, these foreign entrants are persons who have, after serious and committed study, (usually acquainted with other faiths), decided that the Dhamma is the best option to address their own problems, and those of the contemporary World. As a consequence of this manifest conviction, and thoughtful absorption of the Buddha’s teaching, they tend to be persons of high intellectual merit. Nothing should happen to blemish their convictions and create doubts about their choice. This is precisely what the recent incidents might do.

It is a widespread and continuing crisis that is drowning our nation, we do not need to create more self-made problems. The pervasive and generally corrosive and unhelpful intrusion of divisive and unsavoury “politics” into religious discourse, is not acceptable.

If anyone outside the artificial sub set, “Sinhala Buddhist” were to point out truths, he would be readily vilified, by the idiot sector (lunatic fringe) who will react, in pretended horror. It is therefore up to this unreal political sector to intervene.

The best action that could be recommended is to dismiss all of the Student “monks”. Any who have not participated in the vulgarity of misnamed “Ragging”, unruly conduct and boozing, could be readmitted on an explicit promise of conforming to the dignity expected from members of the order of monks. A kind of “suspended sentence”.

In the longer term, serious attention should be given to the need for “training institutes” for Bhikkhus. It would be excellent if persons of the calibre of Ajahn Brahmavanso can be persuaded to supplement our own carefully selected monks in planning for the future.

There are many monks of stature and erudition whose services should be sought. Ideally, an arrangement could be made to send promising young aspirants to see what systems operate elsewhere. The concept of “Forest Hermitages” as has been established and nurtured by the likes of Ajahn Chah in Thailand, cries out for emulation by us. Several such refuges are already in existence in Sri Lanka. These are potential nuclei and to serve as appropriate models.

When the SLFP of the time resolved to confer university status on those impeccable and highly respected institutions, the Vidyodaya and Vidyalankara Pirivenas, the rot set in. The Pirivena Universities Act is second only to The Sinhala Only Act.