TWO WOMEN COPS WERE ONLY “POSITIONED” 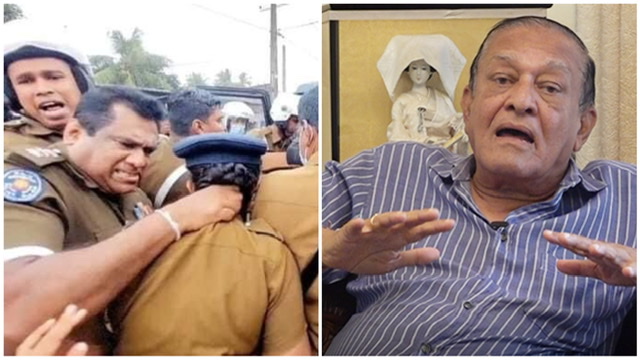 National Police Commission Chairman Chandra Fernando has opined that he doesn’t think that the manhandling of two women police constables by a senior police officer recently constituted harassment, but claimed they were “positioned”, The Morning newspaper reported.

Speaking to The Morning, Fernando, who is also a former Inspector General of Police (IGP), said: “What happened there was two female protestors were to be arrested, and male police officers were not permitted to handle them. Therefore, some female police officers had been called, and where were they? They were standing at the back, but their role should have been in the front.

“When the arrests were to be made, female officers were not available, and so they were pushed to the front by the OIC. How can this be harassment? Harassment is something totally different. At that moment, the OIC (Pinto) was stressed, and the female PCs, who should have been assisting him, were at the back. That is why he positioned them to the front. I do not think that they should have been pushed, but I also do not see it as harassment,” he added.

On 13 November, Police Media Spokesperson SSP Nihal Talduwa said the Inspector General of Police (IGP) has ordered the Director General of the Special Investigations Unit to conduct a special investigation regarding the activities of the Chief Police Inspector of Panadura South. (NewsWire)