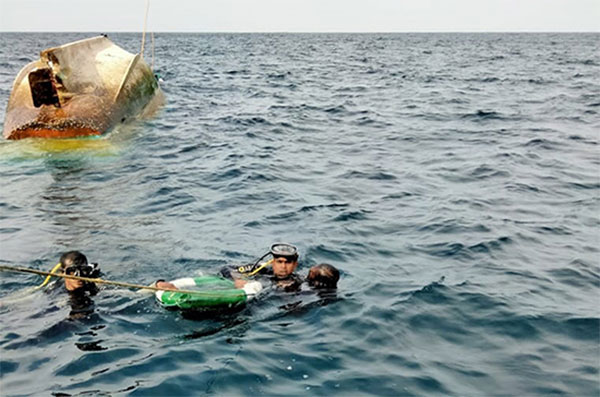 The Navy rescued four fishermen including one trapped inside a multiday fishing trawler in distress in south-eastern waters and rushed them to the Kalmunai Hospital for treatment on Sunday (11). The fishing trawler had capsized about 46 nautical miles (85 km) off the Sangaman Kanda Point, following adverse weather, the Navy said.

The fishing trawler “Himsara” left the Trincomalee fisheries harbour on 26 Nove., with five fishermen. On receipt of information of the distress to the Navy Headquarters, the Navy launched the search and rescue operation to retrieve the fishers from the watery grave.

The Navy sent SLNS Ranarisi patrolling in south-eastern waters for the rescue of fishermen. Accordingly, naval personnel with the assistance of a local fishing trawler in the area rescued 03 fishermen from the capsized trawler and SLNS Ranarisi carried out a diving operation to locate 02 missing fishers. After a strenuous effort, the Navy rescued a fisherman trapped in the engine room and brought him ashore, administering him first aid. Subsequently, all four fishermen were rushed to the Base Hospital – Kalmunai for medical attention.