DREAM OF FORTY SIX LANKANS TO FRANCE ENDS IN CID 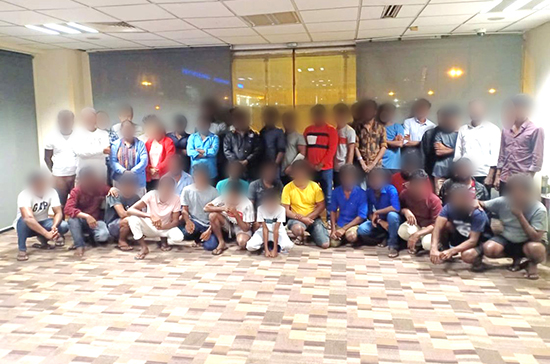 The suspects set out aboard a multiday fishing trawler (IMUL – A- 0559 CHW) from Negombo on 02nd December 2022. The group of individuals comprises 43 males including the crew of the multiday fishing vessel, 02 females and 01 boy. They were apprehended as they were attempting to illegally enter the Réunion Island of France on 24th December 2022. They have been identified as residents of Jaffna, Kilinochchi, Mullaitivu, Mannar, Batticaloa, Chilaw and Negombo, from 13 to 53 years of age.

Meanwhile, the group of individuals will be handed over to the Criminal Investigation Department for onward legal action.

It has been revealed that the smugglers in Dehiwala area, who led this smuggling, charged an amount from Rs. 200,000 rupees to Rs. 4,500,000 from one person. Smugglers orchestrate this nature of unlawful acts with the intention of making a fast buck, by defrauding innocent people. Therefore, the Navy urges the public to avoid being victimized to such ploys and waste their hard-earned moneym

The French government does not entertain the illegal entry of people to the Réunion Island and such people will be immediately repatriated upon apprehension.