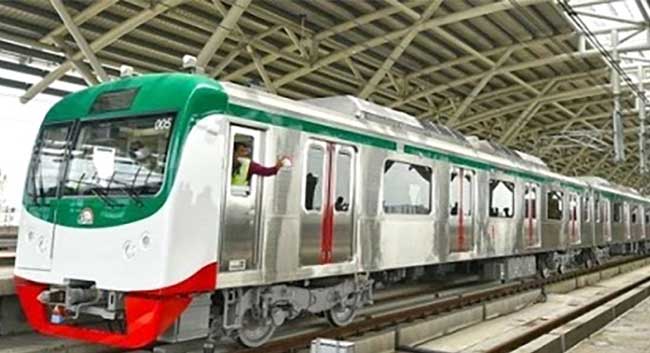 On December 11, the Sunday Observer reported that the Japanese Government has agreed to reopen the Colombo-Malabe light rail project more than two years after it was highhandedly terminated by then Presidential Secretary PB Jayasundara. The project design was to start in July 2019 and construction completed by the end of 2024. The Malabe line is one of seven corridors radiating from Colombo and extending towards, Negombo, Kandy, Kaduwela, Malabe, Kottawa, Piliyandala, and Moratuwa. The seven corridors were identified for providing rapid transit service as part of the Western Region Megapolis Transport Master Plan (TMP), which was completed in November 2016 during the previous Ranil-Sirisena government with Champika Ranawaka as Megapolis Minister.

The Malabe line stretching over 16 km and including 16 stations, was to be financed by a soft loan arrangement with the Japan International Cooperation Agency (JICA) covering 80% of the project cost of $2.2 billion. After the November 2019 Presidential election, the (new) Rajapaksa-Rajapaksa government signed a 30 billion yen concessionary loan with Japan for the project. Then, out of nowhere the Rajapaksas decided to cancel the project in September 2020, primarily to snub Champika Ranawaka, and to potentially explore other funding channels with assured kickbacks.

This was the first of two rebuffs that the Rajapaksas dished out to Japan. The second being the reneging of the 2019 agreement with India and Japan for the development and operation of the East Container Terminal at the Colombo Port. And now the current Ranil-Rajapaksa government has begged out a way with Japan and obtained its agreement to reopen the LRT project. This is a technically positive development even though Malabe Line is only one of the many pieces of transport infrastructure that Colombo and Sri Lanka direly need. Without a higher order transit system, Colombo will remain stuck with tuk-tuk as its most convenient mode of public transportation. 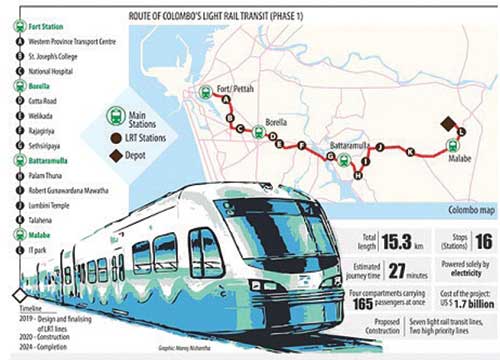 Transport infrastructure development is a constant work in progress that takes time, resources and supporting institutions. There is no magic wand solution to transportation in general, and urban transportation in particular. And countries with funding constraints should be project-ready to seize funding opportunities for project implementation. Only in Sri Lanka infrastructure funding opportunities are politically spurned by patriotic scoundrels. In one year, 2020, Sri Lanka walked away from the MCC grant of $480 M offered by the US government (that could have been used to upgrade 130 roadway junctions in Colombo and implement transit priority measures), and cancelled the agreement with Japan to implement the Malabe LRT line for no logical or sensible reason. It is a different story in Bangladesh.

On December 28, Prime Minister Sheikh Hasina ceremonially opened Bangladesh’s first metro service for Dhaka. Joining the ceremony were the Japanese Ambassador to Bangladesh and a representative of Japan International Co-operation Agency (JICA), the same agency sponsoring the Malabe LRT project in Sri Lanka. The project was mostly funded by Japan and is one of the six Mass Rapid Transit (MRT) lines that are slated to be built. The Bangladeshi Prime Minister called it “another feather of pride” to the people of Bangladesh and the development of Bangladesh. The Prime Minister also used the ceremony to commemorate six Japanese engineers working on the project who were among the 29 people killed during an attack on a Dhaka cafe by Islamic extremists in 2016, as the MRT project was getting started.

Similar to the Malabe line in Colombo, the service that was opened in Dhaka is Phase 1 of MRT Line-6, and is the first to be constructed out of six Mass Rapid Transit (MRT) lines. MRT Line-6 is mostly an elevated 20 km long route with 16 elevated stations, and the completed first phase is about 12 km long with nine stations at a cost of $2.8 billion. Line-6 construction is funded through a loan agreement with JICA finalized in 2013, and construction began in 2016.

The six MRT lines are part of Dhaka Metro, the rapid transit component of the City’s 20-year Strategic Transport Plan, which will include both MRT and LRT systems to serve the nation’s capital city of 20 million people. The MRT system (with all six lines) will extend over 120 km at an estimated implementation cost of $20 billion, and will provide high frequency (every four minutes) and higher speed (100 km/h) service, using trains comprising six spacious air-conditioned cars each and electronic ticketing.

The implementation the MRT system comes under the purview of the Ministry of Communications and is led by Dhaka Transport Co-ordination Authority. A separate agency for implementing MRT Line-6 has been created, viz., Dhaka Mass Transit Company Limited (DMTC). The General Consultant for the project is the NKDM Association comprised of Nippon Koei (Japan) and Development Design Consultants (Bangladesh). The construction contractor is a consortium led by foreign companies including Italian-Thai Development Public Company, Sinohydro of China, and a Tokyo construction company.

My reason for comparing Dhaka and Colombo, or Bangladesh and Sri Lanka, using urban transportation as an indicator is to point out the development trajectories of the countries – from where they were when they became independent 23 years apart (1948 and 1971), where they are now and where they are heading. Sri Lanka became independent in 1948, with a healthy balance of payments, thanks mostly to the ‘financial prudence’ of the colonial administration even while contributing to the Empire’s war effort. The Sterling reserves at independence had nothing to do with the first UNP government, as President Wickremesinghe has recently been claiming. In fact the UNP government ran through the reserves in what AJ Wilson has described as “an orgy of unplanned spending.”

The World Bank has been effusive in its praise, calling the country’s transformation from the world’s second poorest country to be one of the fastest growing economies as “one of the great development stories” of our time. A country of 165 million people, it is now generating strong domestic demand to sustain its economic growth. Transport and physical infrastructure are key components of its development momentum. Mega projects are diverse by sector and by location and the country is now getting to a stage where it can pay for its mega projects. Some of the projects, in addition to Dhaka Metro, include the Padma Bridge, Matarbari Port, and the Karnaphuli Tunnel for an underwater expressway beneath the Karnaphuli River in Chittagong. 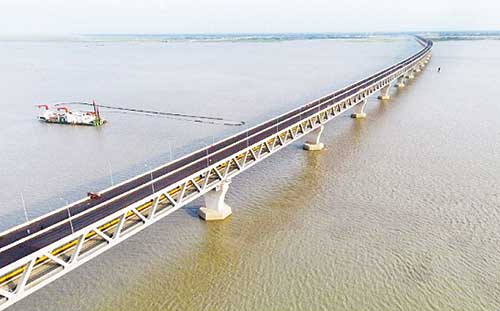 The story of Padma Bridge is as old as Bangladesh. It was first identified as a feasible project in the former East Pakistan before the outbreak of the war. Sheikh Mujibur Rahman, the founding father of Bangladesh, wanted the bridge built after the liberation of Bangladesh, but the project went dead after his assassination. The project was on and off with frequent government changes, until Sheikh Hasina as Awami League PM laid the foundation stone for its construction in 2001. But Awami League lost the general election in 2001 and the incoming BNP (Bangladesh Nationalist Party) government terminated the project out of political spite. The same BNP government resurrected the project six years later and the project was on its feet again after the Awami League returned to power in the 2008 elections. Then it ran into a corruption storm.

The Padma Bridge project became notorious all over the world for its corruption scandals and the World Bank famously withdrew its support for the project with other donors following. The government of Bangladesh stepped in to take over the project and complete it with its own funds. The project is now completed, designed by AECOM, a US consulting giant out of its Hong Kong office and built by a Chinese construction firm, China Major Bridge Engineering Company Ltd, at a total cost of $3.6 billion, which Bangladesh paid.

The new bridge crosses the Padma River, the largest tributary of the Ganges in Bangladesh and among the most turbulent rivers in the world. The steel truss bridge is a significant engineering achievement, extending a total length over six kilometres in 41 sections (each 150 m long and 22 m wide), and supporting an upper deck of a four-lane highway and a lower deck of a single track railway. It is the longest bridge over the Ganges and the deepest in the world with piles sunk as deep as 127 metres. Prime Minister Hasina opened the bridge in June this year, reportedly one of more than 100 bridges she has been opening in recent months. Evidently, Bangladesh has come a long way since fiery birth in 1971 and decades of economic and sociopolitical traumas. What about Sri Lanka? (To be continued).

DON’T MISSScotland must give a voice to victims of colonialism, slavery and empire