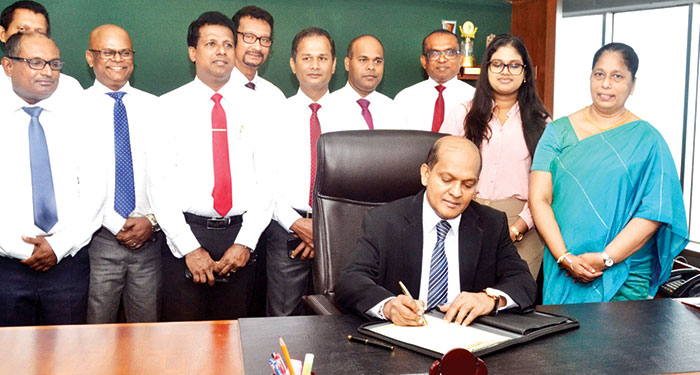 BOC new GM/CEO Russel Fonseka assumes duties at the BOC Head Office in Colombo yesterday with some members of the BOC management in the background along with his wife and daughter.

The Bank of Ceylon (BOC), the leader of inward remittance business in Sri Lanka, is confident that it will be able to regain its past glorious levels of foreign exchange remittances by the end of 2023 or within 2024.

The new General Manager/ Chief Executive Officer of Bank of Ceylon, Russel Fonseka made these comments to The Island Financial Review yesterday after officially assuming duties in the crucial post of the Bank.

“If I remember correctly, BOC recorded its highest foreign remittances of US dollars 4 billion in 2019, and at the rate things are improving currently, we believe that we should be able to reach the same level of inward remittances by the end of 2023 or within 2024,” he said.

Having joined the BOC in 1990, Fonseka has notched up 33 years of service with the banking giant and was serving as the Additional General Manager and the CFO before assuming duties as the 23rd General Manager of the Bank.

Russel Fonseka has successfully steered and given leadership to the various divisions that came under his purview. He has held the positions of Chief Financial Officer, Head of Finance and Planning, Head of International, Treasury and Investments, Head of Retail Banking and Head of Corporate and Offshore Banking. The exposure to many areas of banking would be a distinct advantage as he faces the task of steering the premier bank in Sri Lanka during what looks to be the most turbulent period the country and the globe has faced in recent times.

Fonseka said that he took up the challenge not only because of his confidence to steer the Bank through the turbulent times and give crucial support to the national economy, but also due to his confidence in the capabilities and commitment of the senior management and staff that he is supported by.

Responding to a question by the media about the Bank’s ability to provide US dollars to its customers for their international trade transactions, he said,” After the Central Bank of Sri Lanka (CBSL) effected the relaxation on exchange rate, we have been able to fulfill the dollar requirement of our customers. In addition to that, many other Sri Lankan customers come to BOC for their foreign currency requirement and we oblige them too.”

He pointed out that the exchange rate relaxation helped minimise the gap between the official and the unofficial exchange rate of the US dollar.

“In this backdrop, now a lot of expatriate workers have turned back to remitting their earnings through formal banking channels. This has increased BOC’s inflow of foreign remittances. In the last couple of months, we were able to contribute a huge sum of foreign exchange to the national economy to finance the import of fuel and other essential commodities. We think that we will be able to further increase this capacity and elevate our ability to match the foreign exchange requirement of the country.”

When asked about high lending rates, he said,” While new loans will have to be worked out at current market rates, the business loans we had given some time back are still effective at lower rates. This means still there are business customers who are enjoying 12%-18% rates depending on the rates regime they had chosen at the time. For hardly any customers have we increased our lending rates to 30%.” he said.

“Our non-performing loans (NPLs) compared to the industry are at a very low level because of our unique loan recovery concept. We don’t want to take our non-paying borrowers who are genuinely in trouble to court. Instead we collaborate with them and help them constantly for the recovery of their businesses,” he said.

Giving his thoughts about the trajectory of interest rate movements in the future, he said, “Even though the current interest rate in the market is 30% as influenced by the T-bill and T-Bond rates, we have taken some initiatives to moderate it. We have a small cartel in the banking industry and we have decided not to pay more than 26% for fixed deposits. In the time to come, we are planning to decrease it further. We hope this will help us reduce our lending rates to businesses and entrepreneurs and achieve real growth in the economy through export-oriented manufacturing and providing of services to the key markets of the world.”