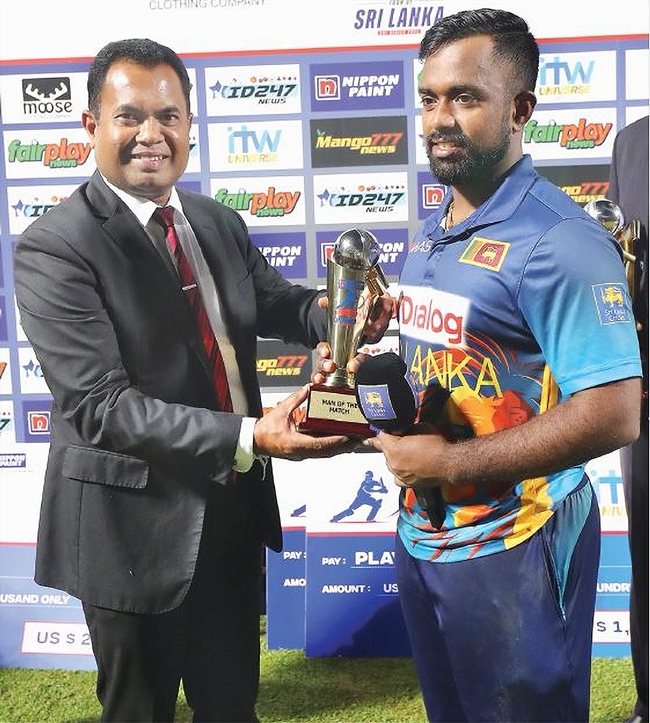 If you had no idea why Roy Dias identified Charith Asalanka as a Test captain in the waiting some seven years ago, there was proof for his claims at Pallekele on Wednesday as the diminutive left-hander from Elpitiya pulled off a stunning run chase against Afghanistan.Sri Lanka chased down a target of 314 in the last over with Asalanka finishing things off in style with a pulled six. What’s so special with the win is that it is Sri Lanka’s highest successful run chase ever at home.

“I was struggling with cramps. The heat was too much in the afternoon.

Once Dunith came in, I told him not to do too much running and target the gaps. There was a good partnership with Dasun too before that and that helped us to get back into the game,” Asalanka noted.Most players when they get into the Sri Lankan cricket set up they get themselves tattooed and buy fancy cars and luxury apartments. Asalanka has remained grounded and he is very much close to his roots at Elpitiya.

In fact, he married his childhood sweetheart, whom he fell in love with at the age of 15. The pair met at the school bus when Asalanka was playing under-17 cricket and despite money and fame the captain in waiting hasn’t forgotten his past. Asalanka took a break middle of the series to get married on the 28th of November, the day of their tenth anniversary of falling in love. However, there was no honeymoon as Asalanka had to return to Pallekele for the rest of the series.

His wife is an English teacher and that gives us hope that press conferences are going to be interesting again although the good old days of Sanga will never come.Asalanka received a scholarship to Richmond College after passing the Grade Five scholarship and he is known as a sharp thinker of the game.

“First game the ball swung a lot. It was a grassy pitch. We knew this wicket was not going to do much for the bowlers. The main thing we wanted was to bat 50 overs. Everyone contributed from top to the lower middle order, and it was great to watch.”

Sri Lanka have a settled top order when it comes to white ball cricket and the middle order could be built on Asalanka who can accelerate and rebuild an innings. “Dasun is the one who told me that I’d be batting at number five and to feel comfortable. I was going to get the long rope. I had never batted at number five before that and glad I have cemented my place now.”

“This is my best innings in international cricket. Dunith Wellalage was outstanding as well. Afghanistan have a very experienced side. They have lot of players who are involved in league cricket. Dunith showed lot of maturity.”

“We had identified that Rashid Khan was their key players. We didn’t want to take risks against him. We got out for some good balls. We made sure that we didn’t give wickets to him, and it got easier to score runs.